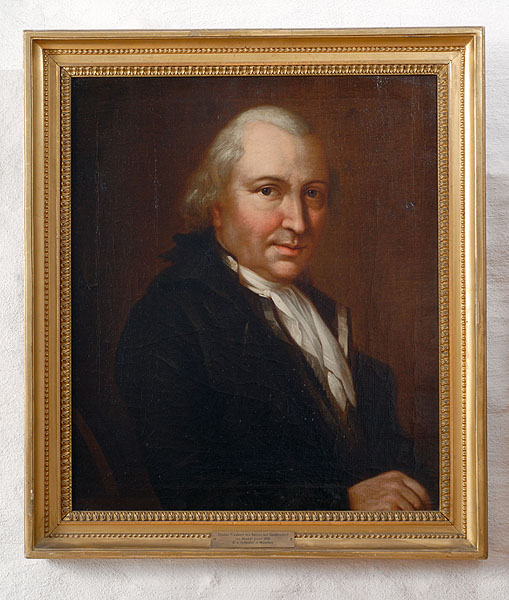 The de Bassus family, whose ancestral seat in Bavaria was Sandersdorf Castle in Altmannstein (now the property of the Wittelsbacher Ausgleichfonds), came from Graubünden canton in Switzerland (Val Poschiavo). The Ingolstadt jurist, Professor Dr. Domenicus de Bassus, doctor of canon and civil law, acquired the Eggersberg, Untereggersberg, Thann, Georgenbuch, Harlanden and Tachenstein Hofmarks from the bankrupt estate of the Dachau steward and court counsellor, Peter Jocher zu Egersperg, in 1684, at a cost of 16,000 florins.

The de Bassus were a highly respected bourgeois family that, as ministers, succeeded in attaining the status of Freiherr (or baron) in Bavaria through Thomas Ferdinand Maria de Bassus. Thomas, baron de Bassus was a particularly noteworthy man. Elected six times as chief magistrate in Graubünden, he also acquired great wealth in Bavaria. He was a true patron of the arts, discovered the Altmannstein carver, Ignaz Günter, and also the composer, Johann Simon Mayr, who was celebrated in Bergamo and was the most prolific, famous composer of the entire Rococo period - including as Donizetti's teacher.

Through the Ingolstadt native, Adam Weishaupt, he came into contact with the infamous order of the "ILLUMINATI" and, with Adolph Franz Friedrich Ludwig, Baron von Knigge (born 16 October 1752 in Bredenbeck) was a long-time member of its leadership, until the order eventually fell from grace with the dukes and was dissolved. The ILLUMINATI, who are often incorrectly described in today's literature, were an order dedicated to enlightenment, education, science and the development of humankind, which had many famous members, such as Johann Wolfgang von Goethe, among others.

Giovanni Maria, Baron de Bassus, son of Thomas, was president of the Neuburg appellate court and married to Countess Sayn-Wittgenstein-Vallendar-Hohenstein. The couple had 6 children. The book by Massimo Lardi, "Baron de Bassus and the Illuminati" is well worth reading.

In 1947 the Eggersberg Hofmark was sold, thus ending the history of the de Bassus family in Eggersberg.