Fun and wonderful adventures in nature for the little ones 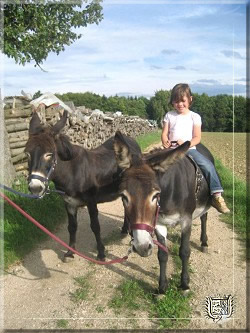 We walk with your children on the backs of our meek donkeys over fields and meadows, or through the woods along the Jura trail and back to the castle. Our lovely donkey guide, Elisabeth Baumgartner, looks forward to showing your children the unspoilt natural surroundings of Eggersberg Castle. 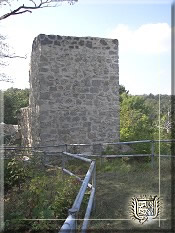 Just a few paces from "New Eggersberg Castle", a well paved path leads to one of the loveliest viewing rocks in the lower Altmühl Valley.

Today, where the proud Eggersberg Castle, home to some famous - and also infamous - families once stood, only the apse of the Chapel of the Holy Cross, which was allowed to fall into disrepair in the 19th century, can be seen.

Two excellent altarpieces from the 16th/17th centuries, which furnished this chapel, can also be admired in the Hofmark-Museum at Eggersberg Castle, as can the monstrance, which contains a verified particle of the cross of Christ, and which was donated to the chapel by Joseph Baron de Bassus.

From the viewing rock, one can look down to the left into the valley of the Old Danube, which flowed here before it broke through the limestone rocks at Weltenburg.

Early on, attempts were made to connect the Main to the Danube. The Fossa Carolina (also known as Karlsgraben) was a connection between the Swabian Rezat river and the Altmühl and thus between the large river systems of the Rhine/Main and Danube. The Karlsgraben was the forerunner of the Ludwig Canal, which was completed by King Ludwig I of Bavaria as well as today's RMD (Rhine-Main-Danube Canal). All canals had to and still must cross the European watershed.

The most popular theory assumes that in 793 Charles the Great had an approximately 3 km long canal excavated in today's Graben near Treuchtlingen. The aim of the undertaking was the replenishment of supplies for Charles' war against the Avars, who had invaded Bavaria in 788.

The canal of King Ludwig I can still be seen from the viewing rock below Eggersberg Castle with an original sluice and a restored sluice house.

Further back on the left hand side, the tower of the old fortified church of the monastery of Altmühlmünster can be seen. This area was already settled in the dim and distant past. The Altmühl and the large church (minster) influenced its name.

One symbol of the Order of Saint John is the bowl above the main entrance to the church, which you may notice. Their coat of arms shows a bowl with the head of St. John. The Order of St. John and the Knights Templar ruled over Altmühlmünster in the middle ages; later the Order of Malta took control. Perhaps you could take a walk from Eggersberg to Altmühlmünster and from there up to the Rosskopf. You are sure to like it...

Right in the background, the crosswise Wolfsberg hill can be seen from the viewing rock of the Eggersberg castle ruins, under whose topsoil an ancient Celtic fortified town, or Oppidum, is hidden.

Turning one's glance to the right, two modern wind turbines can be seen on the opposite hillside. They stand on the ground of the Jachenhausen stone quarry, the site where one of the few examples of an "original bird" the archaeopterix, was found. The smallest dinosaur in the world, and also the most bloodthirsty, which hunted in groups, the "Compsognathus longipes" was also found here. The first models of both can be seen in the Hofmark Museum at Eggersberg Castle.

The new canal, edged by preserved abandoned channels of the Altmühl, which once meandered through this wonderful valley, cannot be missed

...a view that is well worthwhile! 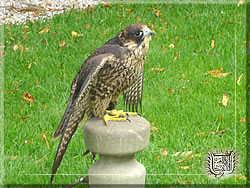 Just a few kilometres from Eggersberg Castle the Rosenburg Castle towers over the town of Riedenburg (today in the hands of the Bavarian Castles and Lakes Administration).

The impressive history of the Burgraves of Riedenburg, who were renowned minstrels in the Middle Ages, is long gone. Today, the Rosenburg houses one of the best Bavarian state falconries. A visit is highly recommended.

Are you familiar with the largest known mineral aggregate in the world? You won't believe it, but it can be marvelled at and admired in the Riedenburg crystal museum in the lower Altmühl Valley. And there's much more on the interesting topic of crystals and precious stones too. It has to be seen to be believed!

Have you heard of Plankstetten Monastery? This Benedictine monastery was founded as an episcopal proprietary monastery in 1129 by Count Ernst VI with the support of his brother, Gebhard II of Eichstätt and Harwig, who was the reeve of Eichstätt.

Not only the historic background and the imposing building are worth a visit; the monastery shop attracts visitors with the scent of homemade organic bread and hearty sausages from the in-house organic butcher's shop.

The Benedictine Abbey of Weltenburg is located directly in the opposite direction, right at the entrance to the romantic Danube gorge. Founded by the Celtic-Columban wandering monks, Eustasius and Agilus of Luxeuil (Burgundy) in around 600 AD, Weltenburg Abbey is the oldest monastic settlement in Bavaria.

The abbey church, which was built and embellished by the Asam brothers from 1716-1739 under the then abbot, Maurus Bächl (1713-1743), is among the outstanding achievements of the baroque period in Europe.

A visit to the Hall of Liberation is a must on the way back from Weltenburg. Commissioned by King Ludwig I, it was begun by Friedrich v. Gärtner and completed by Leo v. Klenze in 1863. It commemorates the victorious battles in the Wars of Liberation from 1813 to 1815 against the troops of Napoleon.

The Wittelsbach golf Club in Neuburg an der Donau is a must for golf lovers. Admittedly it is 60 km away, and takes between 45 minutes and 1 hour to get there. But once there, they will find a club of the very highest quality!