The Munich lawyer, Robert F. E. Weigand, doctor of canon and civil law, founder and honorary chairman of the German Castles Association (DBV) State Committee for Bavaria, and founding member of the Bavarian State Monuments Council among others, (who died in his 91st year, November 2011), acquired Eggersberg Castle in 1962. In order to put the establishment on a firmer financial footing since there were no longer any significant estates, it was initially run as a guest house by the then mistress of the castle, the artistic and culturally-minded Ingeborg Weigand, and then as a small hotel and restaurant, whose first tenant was a Baron Knigge. The decision to enter the hotel / restaurant trade was taken so that the former Hofmark could be opened to the public. Sensitive renovations retained the authentic character of the Renaissance castle.

In the years that followed the western façade and the ruined castle mews were restored in line with the rules governing the protection of historic monuments at great financial cost. The mews are being re-roofed with Jura slate. At 50 metres in length, this will be the longest traditional slate roof in the Altmühl Valley. The village of Eggersberg has the inexhaustible dedication of the castle's owner, Dr. Weigand, to thank not only for the tarred road, which runs along the old, so-called Todensteig (death trail) from Untereggersberg to Obereggersberg, but also, due to the needs of the establishment, to a large extent for the electrification and connection to the mains drainage, which in part runs over Sauberg hill, which belongs to the castle. The initial ideas that developed into what is today the flourishing Altmühl Valley nature reserve, were discussed in detail between Altlandrat Lang and Dr. Weigand at Eggersberg. The Order of Merit of the Federal Republic of Germany and many other honours bear witness to the approval that his cultural activities found.

The "Hofmark Museum" was opened following the establishment of a non-profit foundation in 2004; it displays exhibits, some outstanding, gathered throughout a lifetime of collecting and covering subjects such as "small antiquities", "Hippologica - the horse in art", "Baron de Bassus, patron of the arts and illuminati", "the longest Celtic belt in the world" and more.

In 2007 Dr. Weigand passed the castle to his daughter and sole heir, Marion J. Wenzl-Sylvester, who, together with her husband, H.-P. M. Tassilo Wenzl-Sylvester is now following in her father's footsteps. They began to restore the interior of the house, to lay out a baroque "white garden" on the former riding arena, which had been abandoned following the cessation of hunting on horseback, and to expand the English landscape park to include a scented oasis.

The modern baroque rectory, an axial building by the architect Gabriel di Gabrieli, who designed it in 1772 by order of the Baron de Bassus along the lines of northern Italian palaces, was also restored.

Next they turned to the overgrown, former site of Eggersberg Castle (probably 11th century), which held the remains of the baroque Chapel of the Holy Cross, renovated this site and opened it to the public. The authorities generously participated in this work due to its complicated nature resulting from its exposed location. The result was that an additional wonderful viewing point over the lower Altmühl Valley immediately became available to visitors from near and far. The Wenzl-Sylvester family was honoured for this in 2011, being awarded the Bavarian Monument Medal by the Bavarian Minister for Science and the Arts, Dr. Wolfgang Heubisch.

Art exhibitions, garden markets and a sophisticated range of goods from the kitchen and cellar make Eggersberg a popular base for cultural and cultivated events.

The Wenzl-Sylvesters, a short introduction

The Sylvesters are a noble family who were domiciled in Rovigo and Ferrara/Veneto from the 9th century, and which in the 10th and 11th centuries branched out into Brittany and England, establishing three lines. At the beginning of the 17th century, Giles de Sylvester founded a trading company, "Sylvester & Coit" in Leiden in the Netherlands, which first and foremost saw success in the tobacco and spice trade. His sons, Constant and Nathaniel, emigrated to the New World; Constant founded the "Constant" and "Carmichael" sugar plantations on Barbados, whilst Nathaniel acquired "Shelter Island" just outside New York, where, with the approval of the English king, Charles I, he built a manor house. "Sylvester Manor House" was the northernmost plantation in the USA. As a result, the cosmopolitan Sylvester family has been domiciled in the USA as merchants, lawyers, politically active Congressmen and royalists since 1643.

The Wenzls originally came from the Duchy of Teschen in eastern Bohemia and are first mentioned in the 13th century. In the 16th and 17th centuries branches of the family settled in Austria and Bavaria. In the 19th century Dr. Johann Baptist Ritter von Wenzl became personal physician to King Ludwig I, whilst his nephew, the ophthalmologist, Baron Wenzel, was personal ophthalmologist to both the English King George III and the Austrian Queen Maria Theresa. Emory de Sylvester's second wife was Alice von Wenzl, a niece of Dr. Johann Baptist Ritter von Wenzl.

As a lawyer and deputy, William L. de Sylvester, who, as a politically involved newspaper proprietor published one of the leading fashion magazines in the USA, the "Pictorial Review", with his nephew Wilhelm Paul Ahnelt, swore allegiance to the Constitution of the United States of America in 1921. With this, the family divested itself of its titles, but not its nobility.

The Wenzl-Sylvester family is as committed as the late proprietor of the establishment, Dr. Robert F.E. Weigand, to the authentic preservation of the former Hofmark of Eggersberg Castle, and continues to open the house and surrounding grounds to the public. The fostering of cultural events and the maintenance of the foundation's Hofmark Museum are tasks to which the family is especially dedicated. Now the next generation is preparing to take on an active role in the shape of the two daughters, Alexandra and Marie-Louise. 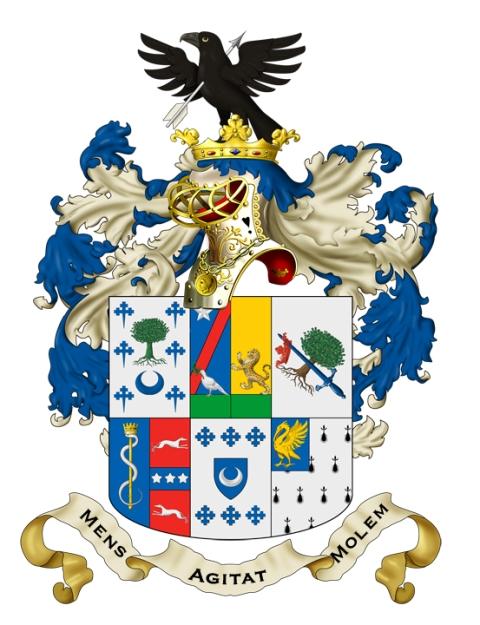 The motto of the Wenzl-Sylvester alliance coat of arms is

"The mind moves the matter"

In the first place, an indwelling spirit nourishes heaven, earth and the watery levels, and reason moves the whole universe, is infused through all its limbs and mingled with the mighty frame.