Monstrance with Particle of the Cross 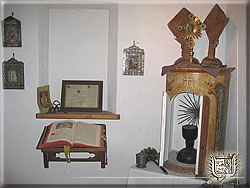 In 1721 Joseph, Baron de Bassus brought a small, silver gilt monstrance to Eggersberg, which has a cross of quartz at its centre. This crystal cross contains a verified particle of the cross of Jesus. Baron de Bassus donated this monstrance to the chapel that he had commissioned, which was built on the castle rock and which henceforth bore the name "Chapel of the Holy Cross".

The monstrance is preserved with its original sheath and can be seen in the Hofmark Museum, alongside other endowments from the Eggersberg parish.

The Eggersberg parish dates back to the first Romanesque chapel in Georgenbuch, which was founded in 798 and belonged to the monastery of St. Emmeram in Regensburg.

The churches in the parishes of the old Eggersberg Hofmark

The imposing structure of the Renaissance Eggersberg castle towers over the wonderfully charming Altmühl Valley on the sparse Jura plateau. The parish of the former Eggersberg Hofmark was one of the smallest in the Regensburg diocese. Nevertheless, it has an eventful history.

The rivalry between Eggersberg Castle and the parish church of Georgenbuch is noteworthy. Something that has elsewhere been sought in vain has been preserved in this parish church - the sculpted stone walls of a portal from the Romanesque origins of the church. Dr. Robert F.E. Weigand, lord of the castle at Eggersberg since 1962, prevented its demolition and thus protected this important cultural edifice from irrevocable destruction.

The animal and fable figures of this Romanesque portal are shrouded in secrecy, yet still move people today; however they will not reveal the final secrets of their origins and builder.

Worthy of mention is

that the rectory of Georgenbuch was not located on this site, but on the site of the castle and later the "new" Eggersberg Castle, in Obereggersberg. The rectory was built there on the foundation walls of a medieval castle chapel. At the rear of the rectory above the exit door is a relic from this time, a stone illustration of God the Father dating from 1593 that is embedded in the wall.

The baroque rectory, an axial building, was constructed on behalf of Baron de Bassus in 1722 modelled on Italian palaces by no less than the Prince Bishop's court master builder from Eichstätt, Gabriel di Gabrieli. 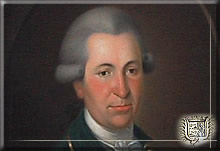 Alongside Georgenbuch and Obereggersberg, the Hofmark of Harlanden should also be mentioned in the parish of Baron de Bassus. The small church there is only unprepossessing from the outside. Inside it houses works by the Altmannstein sculptor, Johann Georg Günter. This was the father of no less than the famous Rococo sculptor, Ignaz Günter, who was sponsored by Thomas, Baron de Bassus.

This brief introduction to the historic parish of the time-honoured Eggersberg Hofmark makes it clear that there is much of importance to be seen here.

From the beginning a castle chaplaincy with castle chapel was established in the early medieval Eggersberg fortress, which lies on the 90 metre high, steep rocky outcrop above the Altmühl Valley. As long ago as the 9th century this belonged to the Monastery of St. Emmeram in Regensburg. 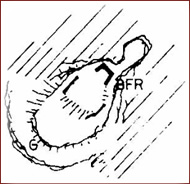 (Layout plan of Eggersberg Castle: modified after F.-W. Krahe - Burgen des deutschen Mittelalters (Castles of the German Middle Ages), 1998. An architectural schematic diagram of the castle was produced by the architect, Dr. Landgraf, and can be seen in the Hofmark Museum.)

This was the start of a centuries-long tug of war between Georgenbuch and Eggersberg concerning the importance and predominance of the parishes. Not only the respective lords of the Hofmarks but also the local priests repeatedly attempted to move the title from Georgenbuch to Eggersberg.

After the decline of Eggersberg Castle in the 16th century, the castle chapel also disappeared. The people of Eggersberg, now without their own place of worship, had to go on foot to the hamlet of Georgenbuch if they wished to attend a church service.

In 1720, the then lord of the Hofmark, Joseph, Baron de Bassus, pursued the plans of his father, who had passed away in 1704, and built a new chapel on the castle hill. To reinforce the site of Eggersberg as the pre-eminent parish, in 1722 Joseph de Bassus also had the rectory in Obereggersberg rebuilt on the site of the previous building dating from 1593 - as already mentioned, this was by the Prince Bishop's Court Master Builder from Eichstätt, Gabriel di Gabrieli. The stately form of the axial building, which is based on the architecture of Italian palaces, resembles the rectory in Schambach, which was also built by Gabriel di Gabrieli, in terms of its proportions, façade structure and service window.

In 1736 the construction of the new church on the castle rock was completed. It did not, however, enjoy a long life. As early as 1806 (note: Bavaria became a kingdom by the grace of Napoleon), the roof collapsed, as a result of which Georgenbuch once again became the parish church. On the site of the castle ruins, the three sides of the apse of the castle chapel can still be seen from the viewing rock today. On the inside of the apse (picture bottom left), the visitor can still see the remains of a red colour, which then was made from ox blood.

Apse of the Chapel of the Holy Cross on the castle rock of Eggersberg
(Author's note: the viewing rock has been secured and opened to the public. Entry to the privately owned, unsecured castle ruins is not advisable and is at your own risk.)

From the viewing rock it is possible to see one of the loveliest views in the lower Altmühl Valley - the Rhine-Main-Danube Canal*, which runs past the foot of the mountain, the left meander of the abandoned channel of the Altmühl and a small part of the old Ludwig Canal (King Ludwig I) with a restored sluice house dating from the 19th century. Looking to the left along the edge of the forest, it is possible to make out the steepletop of the church of the former commandery of the order of the Teutonic knights in Altmühlmünster. From there, incidentally, there is a lovely hiking trail to the next viewing point, the Rosskopf.

The lord of the Hofmark who followed on from Joseph de Bassus, Thomas, Baron de Bassus (a member of the Illuminati, code name "Hannibal") now had a problem. The people of Obereggersberg, numbering 53 souls, once again had to walk to Georgenbuch, a village of just 17 inhabitants at that time, to take part in church services. For this reason, in 1807 Thomas de Bassus had a simple house chapel built in his Hofmark's "New Castle". Its round arched windows can still be seen today on the eastern side of the building on the ground floor.

In the meantime, however, the de Bassus family had concentrated their base in the Hofmark on Sandersdorf Castle near Altmannstein. The Eggersberg Hofmark Castle was only still used as an agricultural establishment and mostly only as the rallying point for hunting trips. The grandeur of the castle and chapel suffered greatly as a result. In 1873 the then parish priest, Lukas, complained bitterly to Baron de Bassus:

"The entire castle courtyard is a colossal manure heap; on the way to the chapel the priest must work his way through this manure heap on the one side and 4 stable doors on the other along the narrow pathway."

Furthermore, he complained that he chapel was anyway only half of the former hall, whilst in the other half the large vessels stood in which the feed for the pigs was boiled. The smoke from the cooking and the smell from the stables and manure made celebrating a church service unbearable.

This caused the de Bassus family to relocate the chapel again and bring it from the castle to the rectory in 1875. There in the years 1897/98, an altar apse was added to extend the interior of the chapel. The priest objected to a larger extension to the apse. This resulted in the chapel again not being large enough, and the Georgenbuch site now definitively became established as the site of the parish church. There the Romanesque nave building had been extended by 20 feet in 1833.

At that time, the nobles of Harlanden had their own manor there. This led to the somewhat curious fact that the subsidiary church of Harlanden was not allotted to the nearby Georgenbuch, but to the parish of Altmühlmünster, the former commandery of the Teutonic knights.. This made it necessary for the Harlanders to pass through the parish territory of Georgenbuch on their way to church. As this circumstance was not sustainable, Harlanden, contrary to the protests of Altmühlmünster, was incorporated into the parish of Eggersberg in 1837.

Today, Georgenbuch and - now and again - also the rectory chapel in Obereggersberg are attended by the town pastor of Riedenburg as provisor.